My new favorite thing to do is listen to Podcasts, they make time go by so quickly and can be informational and hilarious. I honestly haven’t been watching that much TV anymore because I’m always binging Podcasts, I’m trying to find new ones, or listening to old episodes of my favorite ones. I’m constantly talking about my favorite Podcasts so I figured I’d throw them into a blog post for the world to see! All of these can be listened to on Spotify or on the Apple Podcast app. If you have an Android, first off, sorry, second off, I don’t know how that works, so good luck.

Chicks In the Office – Barstool Sports

As you’re about to find out, I’m a huge Stoolie. I LOVE Barstool Sports. They’re hilarious and super smart business people. Chicks In the Office is a newer podcast with only three episodes so far, you’ve probably seen Fran and Ria before if you follow Barstool at all. I am so unbelievably jealous of these girls. They’re 21 and 23 living my literal dream: getting paid to talk about pop-culture and work for one of the biggest media companies in the world. On the podcast they recap the week, and they’ve had celebrity interviews. They’re hilarious and if you’re a 20 something girl you’re probably going to relate to them.

Why Won’t You Date Me – Nicole Buyer 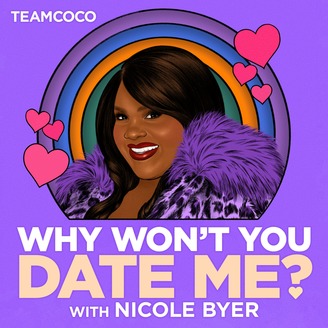 If you don’t know who Nicole Buyer is stop reading this right now and give her a google. She was on MTV’s Girl Code and Guy Code and she is HILARIOUS. She’s currently hosting Netflix’s Nailed It and has a Facebook Watch Tv Show. Why Won’t You Date Me chronicles Nicole’s forever single life. She brings on guests, ranging from friends, celebrities, fellow comedians, and former hookups, and asks them the age-old question “why won’t you date me?” I have laughed out loud at every single episode and Nicole is all too relatable in her quest for a boyfriend.

Jessica Torres is a body posi QUEEN and when I found out she had started a podcast I quite literally screamed. Her and Liesl talk about growing up fat and being fat. I know this one is a little bit more specific to us plus sized girls, but I think that there are lessons to be learned about body positivity that any sized person can relate to. A common trend with my favorite podcasts is that they’re funny, and Fat Girls Club is no exception, it’s not as laugh out loud as some may like, but it feels more conversational. Every episode I listen to I feel like I’m in the room having a conversation with Jessica and Liesl.

I saved my favorite for last. KFC Radio was the podcast that got me into podcasts and Barstool Sports. It all started when Feits (one of the hosts) posted a video to twitter about the Patriots that went viral. So many of my friend’s sent it to me and I not only agreed with everything he was saying in the video, but I quite literally fell in love. John Feitelburg is the love of my life I think… Anyways. KFC radio with Kevin “KFC” Clancy, John “Feits” Feitelburg, and Brendon “Super Producer BC” Clancy (yeah, he’s KFC’s brother) is truly one of my favorite things in the world. It’s laugh out loud funny every single episode, from their quickies to their full-length episodes, I’m always entertained. KFC and Feits bounce off each other so well and you can tell they’re best friends. Full-length episodes consist of the CRAZIEST listener voicemails and hypotheticals and can have some big-time celebrity guests. Quickies are shorter, less than 30 minutes, and usually cover just one topic or are a celebrity interview. If you’re offended easily I don’t really suggest listening because it can get raunchy and gross, but it’s all in the name of some laughs. The number one feminist podcast has got this girl’s vote for number 1!