Alright folks, settle on down because it’s about to be a bumpy ride. 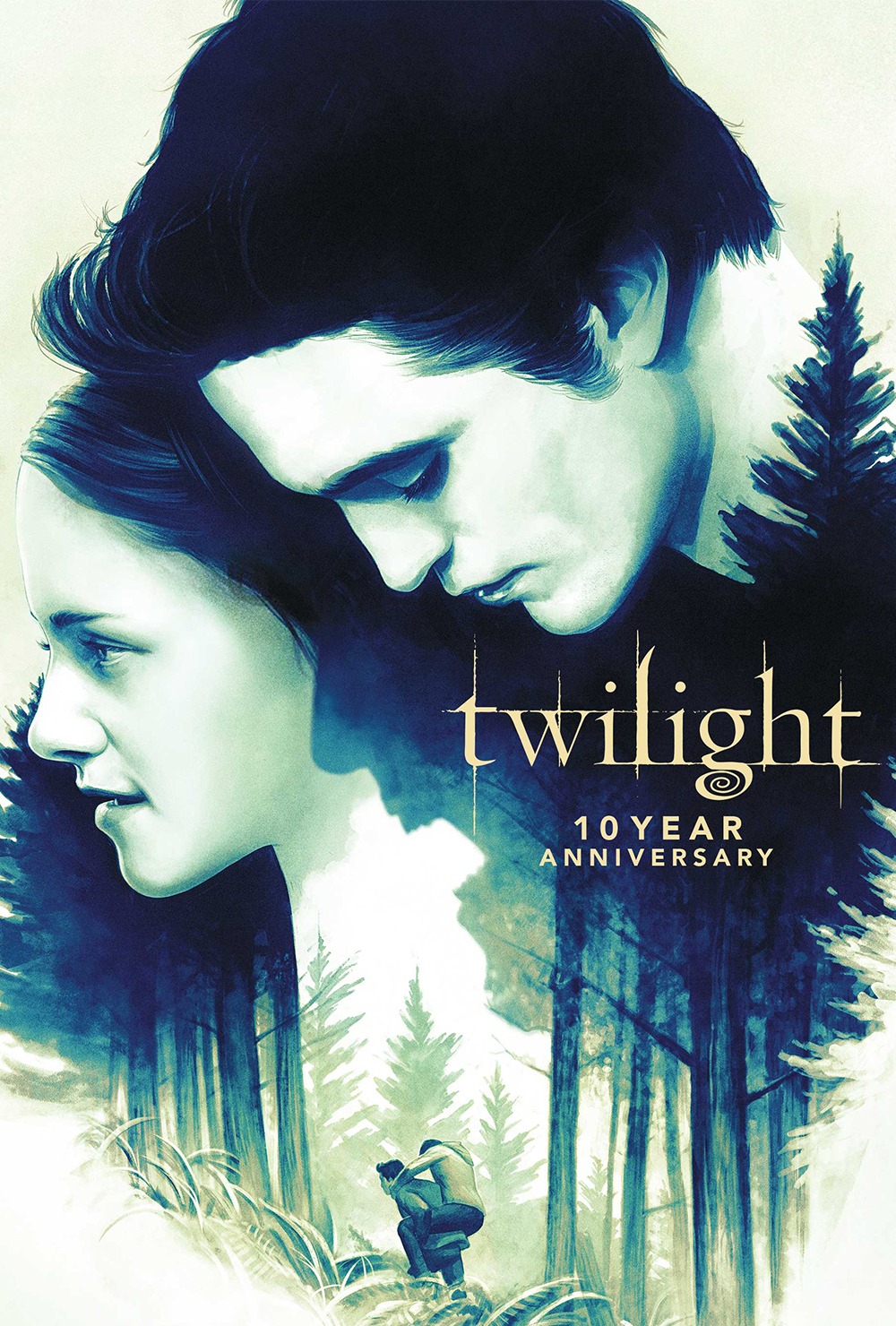 Yesterday, I watched Twilight, the infamous vampire movie starring the one and only Kristen “I hate myself for doing this movie” Stewart and the oh so stunning Robert “I wasn’t in that movie, that was a clone” Pattinson. It was in theaters for the 10th anniversary, and let me tell you something; I blacked out the ENTIRE plot of this movie, so it was essentially like it was my first time seeing the movie.

If you were a *mostly* normal teenage girl, you probably read the Twilight series. If you were slightly less normal, you probably picked a side, Team Jacob or Team Edward. If you were even less normal, you were obsessed and went to midnight premiers of movies, and owned vampire fangs and several t-shirts from Hot Topic. My friends were the latter…  I wasn’t that obsessed, just a little bit (okay a lot a bit) in love with Taylor Lautner. But can you really blame me? I was TWELVE when Twilight came out and 13 when New Moon came out, preteen Sarah was WAY into Taylor’s rock solid abs and dreamy eyes.

Anyways. About a month ago, my friend Kate texted our group chat and asked if anyone wanted to see Twilight for the tenth anniversary. I honestly wish I could find the texts, because I’m pretty sure no one answered and then the next thing we knew she had bought an entire row, 12 tickets, in the theater. I knew it was going to be an interesting night.

One of my favorite things about Kate is how much effort she puts into seemingly small events. There is always homemade pizza, themed plates and decorations, and desserts of some sort. But when I walked into her house, I was not expecting her to have every single piece of Twilight paraphernalia that she owned out on her kitchen table, it truly was a site to see.

Anyways, so we get to the theater mildly late, traffic is stupid, and we walked in and I already had forgotten everything about this movie. We missed the beginning so it started out with the scene in the cafeteria when Anna Kendrick’s character is telling Bella who the Cullens are and what they’re all about. The most important part of this scene is that Kellan Lutz’s character walks in HOLDING A BAG OF HARD BOILED EGGS. Literally, what is going on? Please skip to :27 seconds in this video and see the attached image.

In the words of the great Tatiana, “Choices.”

Anyways. We continue on to the ICONIC scene where Bella and Edward first meet and Edward is so shook by Bella’s smell that he looks like he’s going to vomit right then and there. He can’t stop staring at her and then just straight up leaves school for a few days to avoid her.

THEN Edward comes back, nonchalantly saves Bella’s life and is quite literally obsessed with her. Jacob *swoon* tells Bella the “legend” about how his tribe is descended from wolves and that the Cullens aren’t allowed on their land. This sends Bella into a frenzied research about what the Cullens might be. How she lands on Vampire I still will never understand, but whatever it’s a movie. Totally unrelated to the rest of the movie, but I would love to see Twilight remade where everything in the first half of the movie happens, and Edward angrily follows Bella to the woods where she tells him she knows he’s a vampire, but then in a twist, he says “what the fuck? No?” Because they aren’t actually vampires and his family is just a bunch of weird pale, beautiful people.

Anyways. What happens next is lowkey the most relatable scene in the entire series of movies. Edward basically kidnaps Bella (not the relatable part), and brings her to the top of the mountain and insists he’s horrible for her. He says he’s a murderer, and an animal, a monster designed to kill. She brushes it ALL off and is like “it’s cool, you’re hot though.” (that’s the relatable part). Bella Swan is the POSTER CHILD for girls around the world that fall for guys that are clearly horrible to them and for them. 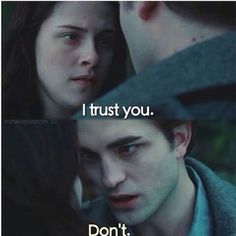 Then we get about an hour and a half of the most sexual tension I have ever seen in my god damn life. Bella and Edward kiss literally once but the entire movie is so sexual and insane, it’s basically 50 Shades of Grey for 12 year old girls. This book series was the sexual awakening for pubescent girls around the world. The scene where Bella and Edward first kiss takes literal years, but I know lil baby Sarah was SO into it. It was a lot of nose touching? And weird neck movements? And then all of a sudden Edward literally RUNS away because he isn’t just turned on, he’s hungry as fuck. I get the same feeling when I sit down at Chilis and get chips and ranch. It is also at this point that we find out that Edward WATCHES BELLA SLEEP EVERY NIGHT. Dude, stalk your prey much?

Truly the only slow part of their relationship is how long it takes them to kiss. They’re in love in what seems like hours. Neither one knows ANYTHING about the other, but they are suddenly just telling all sorts of secrets INCLUDING THE FACT THAT EDWARD IS A VAMPIRE AND LIVES WITH A FAMILY OF VAMPIRES, but you know its fine, young love right? Bella is legit a junior in high school, it’s fine folks.

We now need to talk about the BEST scene in the movie. The baseball scene. Boston Vs LA World Series? Never heard of her.

First off, all of the Cullens, especially Jasper and Emmett, look like SMOKES in their baseball uniforms. I mean I know vampires are all supposed to be beautiful, but they all look fire. Alice has some killer pitches with a beautifully pointed foot. Jasper talks for the first time in the entire movie. And Rosalie is hot and mean and I loved every single second. It’s all going swell until Goth Vampire, Dreads Vampire, and Gorgeous Red Hair Vampiress show up and Goth Vampire decides that he wants Bella just as much as I want Chili’s fried pickles on a daily basis (I love Chili’s, okay).

Jasper and Alice take Bella to Phoenix, which has got to be the dumbest idea possible because it’s her old home town? Like I know they’re trying to get Goth Vampire off her scent, but wouldn’t you take her someone UNFAMILIAR?! The dude’s a vampire, not an idiot… This leads to the scene in the weirdest looking dance studio with the most rapey vibes. If you showed this scene to someone without telling them it was from a vampire movie they would 100% think it was something from Law and Order SVU. Then Edward shows up, they fight, yada yada yada, Bella gets bit, blah blah blah. Edward then has to suck the venom out of Bella without killing her, and Carlisle is like “dude stop, she’s legit dying” without moving a literal muscle to help Bella. Couldn’t Carlisle have shoved Edward, or you know, just sucked the venom out himself because he’s stronger than Edward? JUST A THOUGHT. The next thing we know, Bella and Edward are at prom as if NOTHING happened and Bella has a boot on her foot even though she broke her leg not her foot, but what does that matter, I’m not a doctor.

All in all this movie was not what I remembered it to be. I truly don’t understand why it was the phenomenon that it was… Except I totally can because I am so amped to watch the rest of the movies this weekend. So clearly I got sucked back in by the horrendous acting and my love of Taylor Lautner shirtless. I watched the trailer for New Moon the second I got home and that shit is HYPE, I’m truly not ready for the scene where Bella finds out that Jacob is a werewolf. I will never understand why people were actually team Edward, like come on, he’s creepy! Jacob is a literal puppy dog, and you know, DOESN’T WANT TO MURDER BELLA TO DRINK HER BLOOD. But I guess it works out for Bella in the end because lets not forget that Jacob imprints on her vampire infant… Which to be fair wouldn’t even exist if she had just picked Jacob in the first place. I’m rambling, sorry. TEAM JACOB FOREVER!