SOMEONE, PLEASE TELL ME WHY IN 2018 THERE ARE STILL PROFESSIONAL SPORTS TEAMS NAMED AFTER NATIVE AMERICANS WITH RACIST UNDERTONES!?

and the Chicago Blackhawks 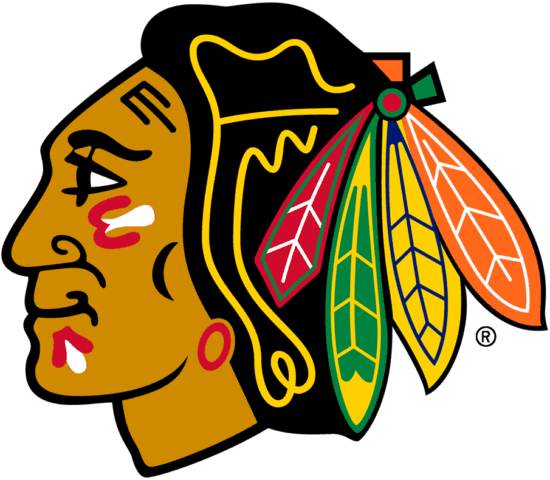 I am so unbelievably mind blown that these logos and names have been allowed in this country. Actually, scratch that, I’m not even really that shocked, just disappointed. Our country is mad racist. Don’t think we’re racist? Okay, let’s play a fun game of hypothetical situation. You, assuming you are a white person because no POC thinks that this country is not racist, have the chance to switch bodies with a person of color. For the illusion, let’s pick a black man. Would you do it? Probably not. Think about it.

Anyways. back to the point of this blog post. WHAT IN THE SAM HECK ARE THESE MASCOTS AND TEAM NAMES? How the HELL is THAT the fucking logo for the Cleveland Indians?! It’s the Native American version of black people drawn as gorillas and monkeys. And the REDSKINS?!?!?! Bruh. Let’s just name all of our sports teams racial slurs while we’re at it.

Upon researching this blog post, aka a trip to the Wikipedia University of Knowledge, there were several polls and studies done where a majority of the results stated that Native Americans did not find the Redskins name or logo racist. But a lot of scholars and others criticized these polls because “The survey doesn’t recognize the psychological impacts these racist names and imagery have on American Indian and Alaska Natives. It is not respectful to who we are as Native people. This poll still doesn’t make it right.” Basically just means just because people are saying it’s fine doesn’t mean it’s fine. Let me break this down a little bit. Think about how we view fat people. Fat people are seen as disgusting, lazy slobs. Most fat people would probably agree. It hasn’t been until recently that the fat population is like what a fucking second… no! That’s what’s going on here. We’ve been so programmed to think that names like the Indians and Redskins are okay because we’ve been taught that it’s okay. History books still call Native Americans Indians. Think about the history of America. We’ve done a lot of stupid shit that was really bad but no one batted an eyelash at. There are a lot of things that are commonplace in today’s society that actually stemmed from racism, doesn’t make them right !!!!!!! We have been so desensitized to things like this that we allow our sports teams to stand around unapologetic about it.

You know what really gets me about all of this though? There are so many other things you could name a sports team, and these mother effers just had to pick something racist. There’s a basketball team that is legitimately called The Jazz. As in the musical genre. You can literally name your team after ANYTHING. It doesn’t even have to be a tangible thing. You could deadass name your team after a blade of grass. ANY. THING. Clothing items, fictional creatures, things that are related to the teams’s city, people, places, things, NOUNS. But no. We’re gunna go the racist route. Someone sat down with a drawing of the Cleveland Indians logo and said “I have our mascot” and a bunch of people said HELL YEAH, and approved it.

Also, there is something so unbelievably ironic about the fact that the football team for the capital of our country has a racist name.

I’m getting so worked up over this. Me and my dad went through all four major American sports trying to figure out if there were any hidden racists names, but couldn’t really find anything about the meanings of some of the ones we were questioning. This could 100% just be because teams obviously don’t want to be writing that they got their name from a rich, racist, white guy back in the 1930’s, but still. This conversation also led to me and my dad talking about the names of black baseball teams from the Negro League from the 20’s and 30’s… Ya’ll these are funny as fuck. We had the Atlanta Black Crackers and the New York Black Yankees, to which my dad said: “maybe those are the biracial teams.” The Birmingham Black Barons, the Washington Black Senators, and a whole lot of other team names with Black thrown in front, so they really weren’t that creative, but honestly black baseball players were just like “yup we’re black and we play baseball, come watch.” This paragraph has nothing to do with anything, I really just wanted an excuse to share my dad’s comments on the Black Yankees and Black Crackers.

Anyways, the moral of the story is we need to start standing up for this bullshit and calling out racist behavior.

This has been another angry rant from your, homegirl. PEACE.