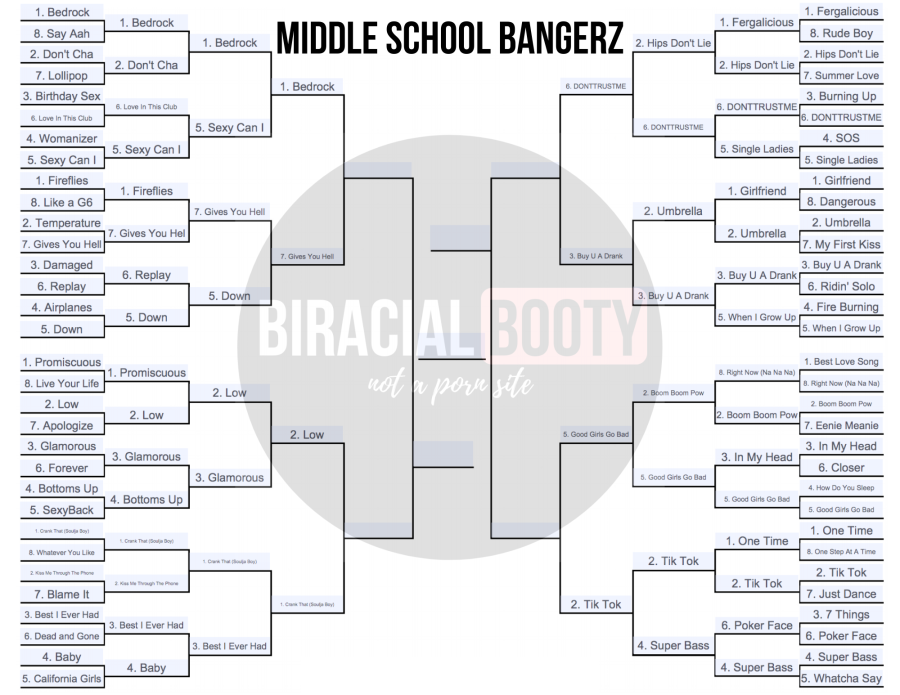 Considering I’m basically in the middle of a 48 hour long mental break down, I wanted to keep it simple on the blog today. Wednesday’s blog looks like a cry for help, I posted it from my phone and didn’t even bother to add a header photo or my typical ending blurb. Everything’s fine, I’m fine. Work has been busy, which is something to be grateful for, but my extraverted ass is losing her damn MIND.

Anyways, why not go through the final 8 left in the Middle School BANGERZ bracket! Eight absolute BOPS are left, and it just keeps getting harder and harder to figure out who’s going to end up on top. Mostly due to my horrible seeding of these songs… WOOPSIES. I take full responsibility for that, but also just know, I probably won’t remember to fix it again next year. Sowwy. 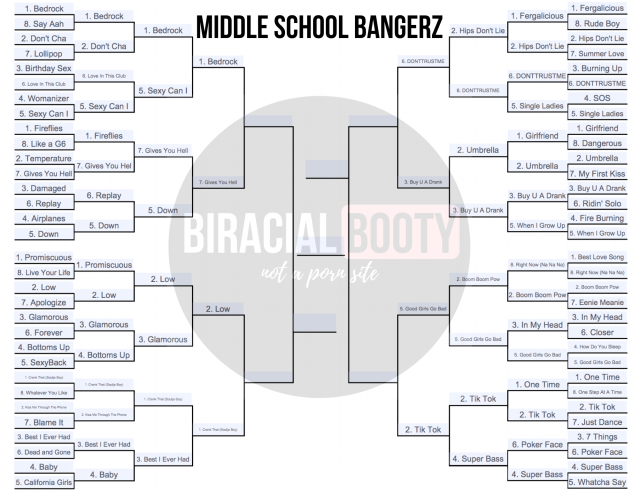 What an iconic fucking song. How fucking inappropriate for me and all my other preteen friends to be singing and dancing to. I knew, and still basically know, every single fucking word to this. Some of the puns in this song are fucking stellar. “And now we murderers, because we kill time.” “But I keep her running back and forth, Like a soccer team.”  And don’t even get me started on when Nicki rhymed bestest with asbestos. I. CON. IC.

Gives You Hell by The All American Rejects

An absolute BANGER of a fuck you song. In all honesty, whenever I hear this song I immediately thing of the Glee cover, but that’s just because I’m such a hoe for Glee. I just love how angry yet fun this song is? It’s a happy beat, and kind of a dancey pop song, but in reality, it’s a GIANT middle finger to the face. 10/10 song to scream sing in the car with your friends.

Low by T-Pain and Flo-Rida

If this song doesn’t immediately drop you into a middle school dance wearing your favorite pair of Uggs and flared jeans with a Hollister or Aeropostal graphic tee on, I don’t even want to talk to you. This song IMMEDIATELY brings me back to middle school, Kathy bag on my arm, rolled down fake Uggs on my feat, Clairs eyeshadow smeared across my eyelids. I was a showstopper to say the least. When I think of Middle School, I think of this song and the next song. Truly there were no bigger songs than this and Crank Dat. They absolutely SMASHED it.

Other than Low, there is no more middle school song than this. The dance craze that rocked the nation. It’s a 1 seed for a fucking reason. You hear this song and anyone that was over the age of ten during this time immediately knows the dance. Maybe not the whole thing, maybe you don’t do it well, but you can, in fact, crank dat. Super man that HOE. Am I right ladies?!

This song personally reminds me more of college than it does of middle school, but it’s still very much a middle school banger. This song has one of the most quotable and iconic lines in music history probably. “Tell your boyfriend if he says he’s got beef that I’m a vegetarian and I ain’t fucking scared of him.” There’s few things better than that fucking line. It’s just INCREDIBLE. It’s even transformed into a Tik Tok sound. Everything comes full circle ladies and gents. Also, “do the Helen Keller and talk with your hips,” while mildly offensive and absurd, a banging line too. Really just an incredible excuse for 12 year olds across America to shake their nonexistent asses.

Buy U A Drank by T-Pain

T-Pain only puts out bangers. Truly. This song throws me right back to 8th grade music class when we had to rewrite the lyrics to popular songs and a girl in my class rewrote this to say Buy U A Lunch. Absolutely amazing. I’m a hoe for a good snap in a song, and considerin this song has snappin in the title it does not let down. Another wildly inappropriate song for 12 year olds to sing, but you know what, that’s fine.

Leighton fucking Meester man. She fucking did that. Wow. Not gunna lie, I’m kind of shocked this song has lasted as long as it has. Don’t get me wrong, I love it, but it was stacked up against some classics. The breakdown of this song really just makes the entire thing. I can’t even imagine how wild bars and clubs would be back then when this song dropped. Shit goes wild when it drops now! Good girls do go bad when this song goes on, that’s all I’m sayin.

Ugh, my girl Ke$ha. Just dishing out banger after banger. Fun fact, when I was in 7th grade, maybe 8th grade, me and a bunch of friends wanted to go to a Ke$ha concert but my mom wouldn’t let me go if there wasn’t a parent there and OBVIOUSLY I didn’t want some parent cramping my style, so I did not go to said concert. I wish to all hell that I had though. How iconic. Peace love miss queen Ke$ha. Her glow up has been REAL.

Make sure you VOTE in the Elite Eight, today is the last day to vote before the final four drops tomorrow!! If you want one of these songs to make it you better fucking vote for it!!!

Here’s the schedule for the remainder for the tournament for those curious:

Not so much going on vacation as I am simply staying at my parents for more than 1 day - but two books and a kindle seem like enough for a weekend? Right?
My favorite part about finishing a book is updating my reading journal (even when I miss-rate the book in pen…)
✨NEW BLOG ALERT✨
My insta buy authors:
If you thought that I was ratchet with my ass hangin' out - Just wait until the summer when they let me out the house, bitch
Holy wow…… thanks for the love and support 🥺