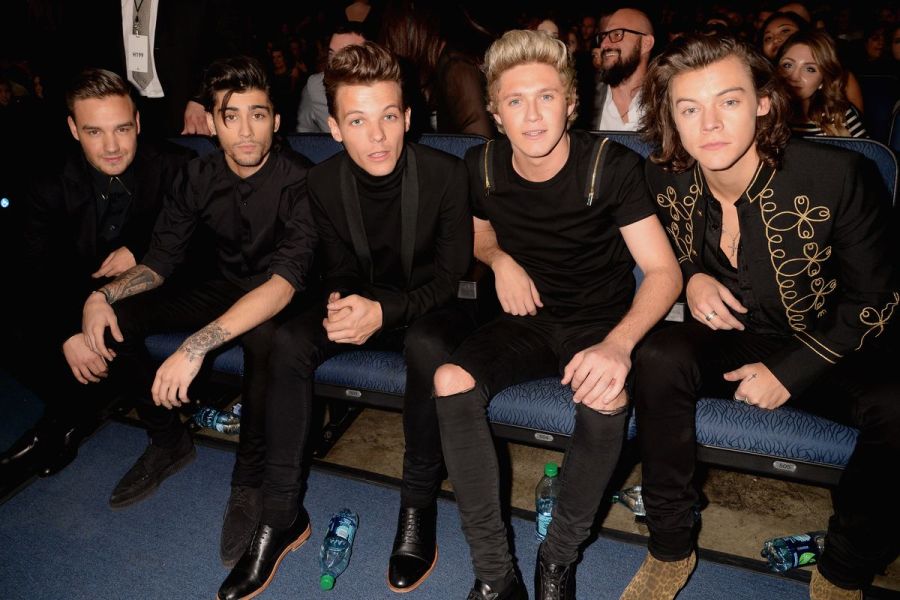 Because that’s exactly what the world needs right now. My personal tiered and ranked list of all eight seven (87) One Direction songs. Sounds like a stellar way to spend my time honestly.

If you weren’t aware of my previous One Direction fandom, well now you know. I’m what they call a One Direction Stan, a directioner if you will. It slowed down for a while there, but now that I’m here with literally all the time in the world I’m slowly slipping back into my old ways. One Direction funny moments videos on youtube, only listening to One Direction songs, crying over Niall Horan, I’m basically 14 years old again. I’m regressing slowly.

During this regression I have done a deep dive into 1D’s discography, and let me tell you, it’s nothing short of fantastic. Five stellar albums. Just an amazing showing from them. I plugged everything into Tierlists.com and started ranking everything. It was backbreaking work truly, but I’m out here doing the Lord’s work. It’s going to be a tad controversial – spoiler alert, I don’t love Little Things, or Night Changes, or You & I… So sorry folks. 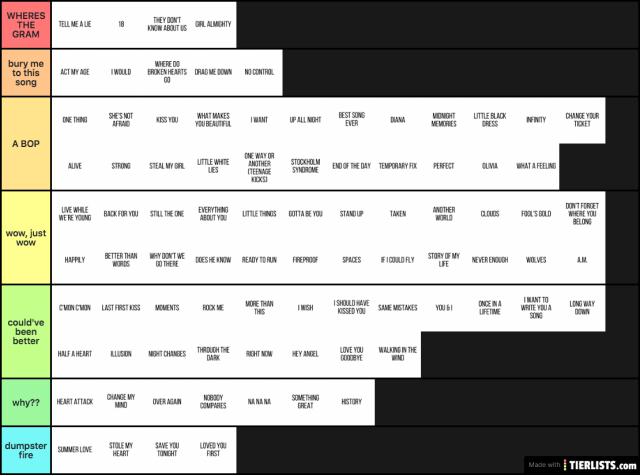 Where’s the Gram – which is supposed to say WHERES THE GRAMMY but for some reason it cut me off, rude honestly. These are the God tier songs. The best of the best. The ones that I could listen to every single day of my life and also deserved so much more god damn hype it HURTS. I was VERY selective with this tier, only four songs made the cut. 18, Tell Me a Lie, They Don’t Know About Us, and Girl Almighty. Just four songs that I make me want to run through a wall, dance, cry, scream, all of the emotions. I’ve actually debated a Girl Almighty tattoo for several years but deemed it a tad too crazy, but if this quarantine keeps up, I will probably end up crazy enough to get it.

Bury Me To This Song – These songs aren’t God tier, but they’re the next best thing. I could listen to them forever, jam to them always, and they’re some of the first songs I think of whenever I think about One Direction. They are teetering on the edge of perfection, but there’s just something inside of me that wants to hold them back. I had to be selective here too, because truly, at the end of the day, you could bury me to any One Direction song and I’d be content. That’s just how I ROLL. These are the songs that need to be screamed, need to be danced to. The songs that I cried over during concerts. I am rethinking my placement of Where Do Broken Hearts Go, it might have to be moved up to Where’s The Grammy. It’s just one of those songs that makes me so incredibly happy and sad at the same time, I can’t begin to put it into words.

A BOP – Here you will find a lot of classic 1D songs: Kiss You, She’s Not Afraid, Up All Night, Best Song Ever, One Way Or Another. These are the songs that I enjoy a lot. They bring me back to the good old days. I stayed up all night waiting for the music videos to drop. I know all the words. They’re not as great as Bury Me To This Songs or Where’s the Grammys, but we love them regardless.

Wow, Just Wow – This comes off a tad sarcastic, but it’s not. These are the songs I love, but they’re mostly just good because of the nostalgia factor. They make me happy to have been a One Direction fan. There’s a lot of songs from their last album on here because if we’re being honest, I blacked out that album. It was the first one without Zayn and is very much a different sound than the other ones, so I hated it when it first came out because I missed the old One Direction. But looking back at it, it’s got some fantastic songs. As I’m sitting here listening to all these songs again, I need to amend and place Everything About You into the A BOP tier. It deserves it.

Could’ve been better – Exactly what it sounds like. The songs are okay, not great, but good. Could’ve been better. You’ll notice Moments, Rock Me, More Than This, Same Mistakes, Night Changes and You & I are all in this category. Don’t come for me. These songs are just not great. Some of the songs on here are from the beginning days and so they truly, truly could’ve just been produced better. Had I Should’ve Kissed You been made in 2014 instead of 2012 it would’ve been incredible, but it has a weird boy bandy cheesy pop vibe, and not in a good way.

Why?? – Arguably good songs, but also arguably bad ones. I forget about them, they feel like filler songs, and they’re just objectively not great. History is in here which is a shock because it was a single, but that song just sucks.

dumpster fire – Four terrible songs. Just terrible. I don’t like them, I don’t want to listen to them. Will I sing along if they get played? Probably. Will I hate myself for knowing all the words? 100%. Save You Tonight is arguably the worst One Direction song of all time. Which is funny, because it wouldn’t be that terrible if it weren’t for the chorus, but the chorus makes me want to DIE. Stole My Heart sounds like a fever dream. Like it just sounds like the kind of song that an evil villain would make everyone listen to control their minds in a shitty children’s cartoon. Weirdly specific, yes, but wildly accurate.

What a rollercoaster honestly. If you want to rank them yourself using my tiers, you can do that here. If you want to make your own tiers, just go to Tierlists.com, it’s a fucking blast if I do say so myself. If you’re a 1D fan I would LOVE to know which songs are your faves and which songs you think are dumpster fires. LET ME KNOW HOMIES!