Should I make this a thing? I never know what to write about on Sundays because my brain is fried from a week of doing absolutely nothing. So why not just ramble a tad?

In 6th grade, my English teacher, Mr. Boyd, shout out to him, used to have us do this exercise called scramble writing, and he would give us this horrendous recycled yellow paper and set a timer, and make us write nonstop until the timer went off. I hated it for several reasons. One because my hand would cramp up, writing nonstop is fucking hard! Two, the paper he gave us was so terrible. If you wanted to erase you’d basically have to accept the fact that you’d rip your paper into shreds if you even tried to touch the tip of your eraser to the paper.  I don’t even know how to explain this paper other than the fact that it was terrible and smelled like cardboard. I also hated this exercise because what on earth was my 12 year old brain supposed to write about?! If you think I’m a dumbass know, you should’ve met middle school me. God, I was fucking awful.

Anyways, the point of all that was to say maybe I’ll just scramble write on Sundays. Get the juices flowing. Set a time for 10 or 15 minutes, play some tunes, and just fucking write whatever comes to mind. Honestly, I could use this for my attention span. I’m not sure when my attention span went to shit, but I can’t focus on anything for more than a few minutes. I may or may not have undiagnosed ADHD. I saw a tik tok saying it presents differently in females and I related to all of the symptoms. But I’m not sure how reliable a tik tok is on diagnosis a mental disorder. Is ADHD a disorder? Whatever it’s called, not sure if I have it or not, but truly wouldn’t be shocked. Someone smart is probably reading this and thinking, of fucking course she has ADHD none of this makes any fucking sense…

“How was your weekend?” she asked into the void. It was fucking beautiful, and I ~socially distanced~ saw some of my friends and hung out in the sun. I also finished, not one, but TWO paintings that I started a few weeks ago. I’ve been on a kick of painting cartoon, outlineish versions of photos, and I painted three big ass canvases of all three of my groupchats that I have. Basically my three groups of best friends. 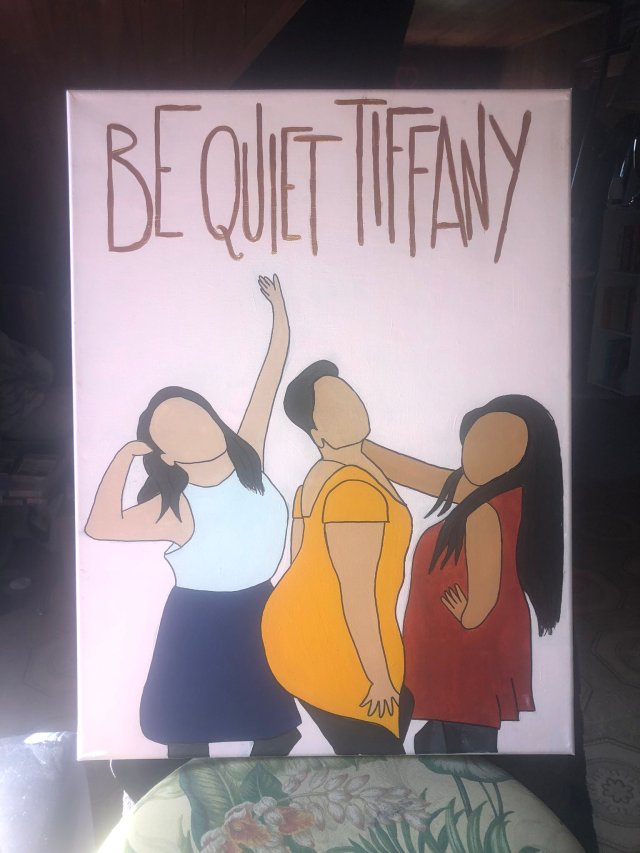 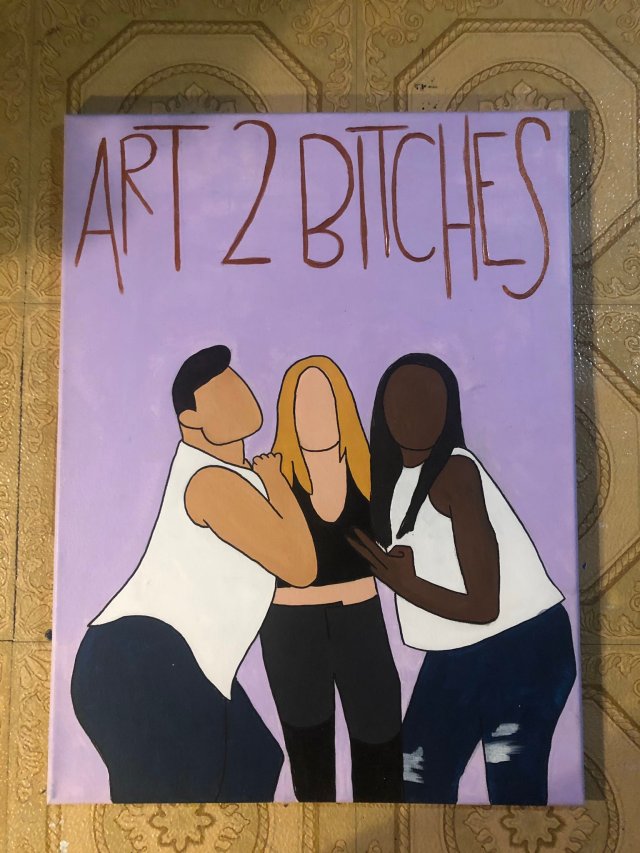 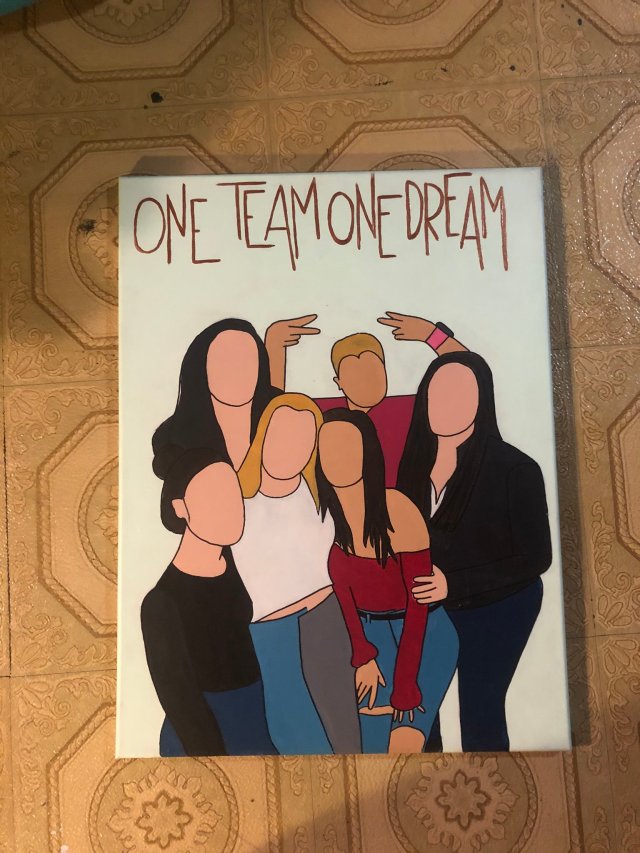 Be Quiet Tiffany are my two best friends from college, Monique and Kelly. Our groupchat is named that after the infamous moment from America’s Next Top Model, a show we watched several seasons of together. Our wifi was named that in our apartment too, obviously.

Art 2 Bitches are two of my friends from home and high school, Chinthu and Cassie. Chinthu’s been my best friend since elementary school and Cassie I’ve known since middle school, but we didn’t become close until junior year of high school. We were in the same art class, Art 2, talking about the upcoming Taylor Swift concert when Cassie asked if she could come with us. The rest is history. I thank the lord above for Wakefield High School’s guidance department placing us in the same art class that year. I don’t know what I’d do without those bitches.

One Team One Dream are also friends from High School, Kate, Rach, Jess, Annie, and Geneva. We played lacrosse together in High School, and our junior year we had to decide what slogan to put on our t-shirts and one of the options was One Team One Dream. We didn’t pick that for our t-shirts but it just stuck with us, and we always made fun of it and said it. So when we finally made a group chat – I didn’t get an iPhone until May of senior year – we named it that.

I miss these assholes so much, but I do get to talk to them everyday which is nice. I can’t wait to get fucking hammered and destroy Boston bars with them again.

I guess that’s it for tonight… Ta ta for now. Thanks for reading this garbage. ❤