I watched the much anticipated Kissing Booth 2 last night and let me tell you, this movie/book series is one of the most poorly named things I’ve ever fucking seen. The Kissing Booth is in both movies for a total of maybe 10 minutes? The second movie is two fucking hours and the majority of the plot is about this random ass, off brand Dance Dance Revolution competition.

I’m going to be completely honest and say that I don’t really remember the majority of the plot of the first movie. I should’ve probably rewatched it before diving into the second one, but based on how fucking TERRIBLE the second one is, I can’t imagine I could’ve sat through both movies. The one thing I do remember is that the plot is not focused on the actual kissing booth whatsoever. It shows up at the end, briefly.

I think we have to take into account the fact that this book, yes the movie was a book first, was written by a 15 year old girl. FIFTEEN YEARS OLD. No fucking wonder this shit was so cheesy and weird!! It’s a fanficiton without being a fanfiction.

I genuinely don’t know if I would have such a problem with this movie if it was called literally anything else. I really think this girl should’ve ran with the list of rules Elle and Lee have or the god damn off brand DDR thing they’re obsessed with. Both the list and DDR have much much MUCH bigger plot points than the fucking Kissing Booth that doesn’t show up until the end of the movie. Can you tell I’m annoyed by this fact.

Here’s a list of alternative titles for the Kissing Booth – please keep in mind that I’m terrible at coming up with titles, you know this based on my fucking blog:

Quite literally any of these would have been better titles.

While we’re here I just want to thirst over Jacob Elordi’s size for a moment. The man is 6’5″. And he’s not a lanky and small 6’5″, he’s a thicc and huge 6’5″ and it makes me want to cry. His hands are huge, his thighs are huge, his arms are huge, his legs are huge, his chest is huge, his *redacted* is probably huge. He is always cast with such tiny women. 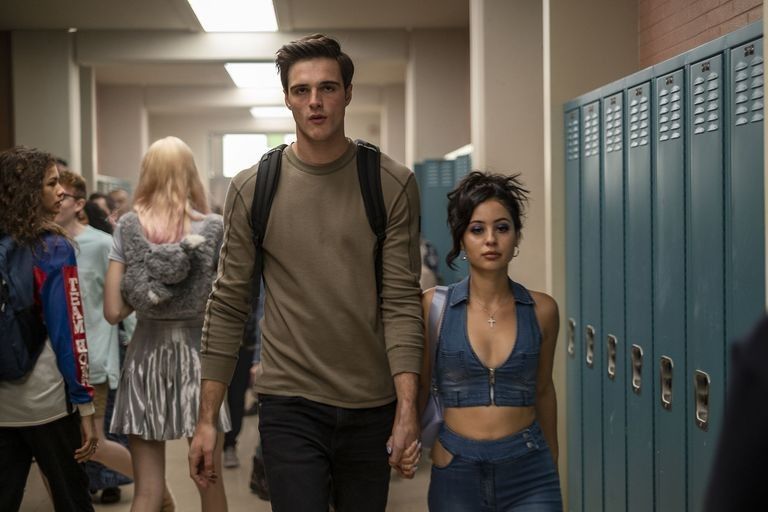 THIS is the height difference I deserve. Although that would put them at like 6’10 probably so I guess I’ll just make my way to the bubble.

Sorry for that little tangent there. It needed to happen. Thanks for listening. Beth Reekles, if you’re reading this, please reconsider the titles of your books. The potential is so there.